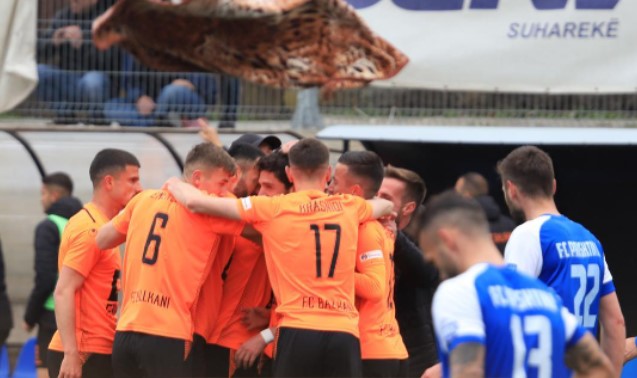 ffk 1 min read
17 April 2022 – Ballkan has taken an important step in its quest for the first title in the history of the club. The team from Suhareka won at home on Sunday against the reigning champion team, Prishtina with 2: 0 within the 29th week in the BKT Super League of Kosovo. To the 19th win in this edition, Ballkan reached with the goals of Blend Baftiu in the 34th minute and Ermal Krasniqi in the 39th minute where the assistant in both goals was Nazmi Gripshi. The latter secured a penalty in the 9th minute but it was not scored by Ermal Krasniqi. After this win, Ballkan continue to hold the first position with 63 points, eight more than the closest follower, Gjilan.
Meanwhile, in the other match, Llapi defeated Drita at Zahir Pajaziti stadium with 1: 0. Llapjans came to this important win thanks to the own goal of Prince Baldes in the 11th minute of the match. Llapi is ranked fourth with only five points behind Drita holding the third place.
Main News