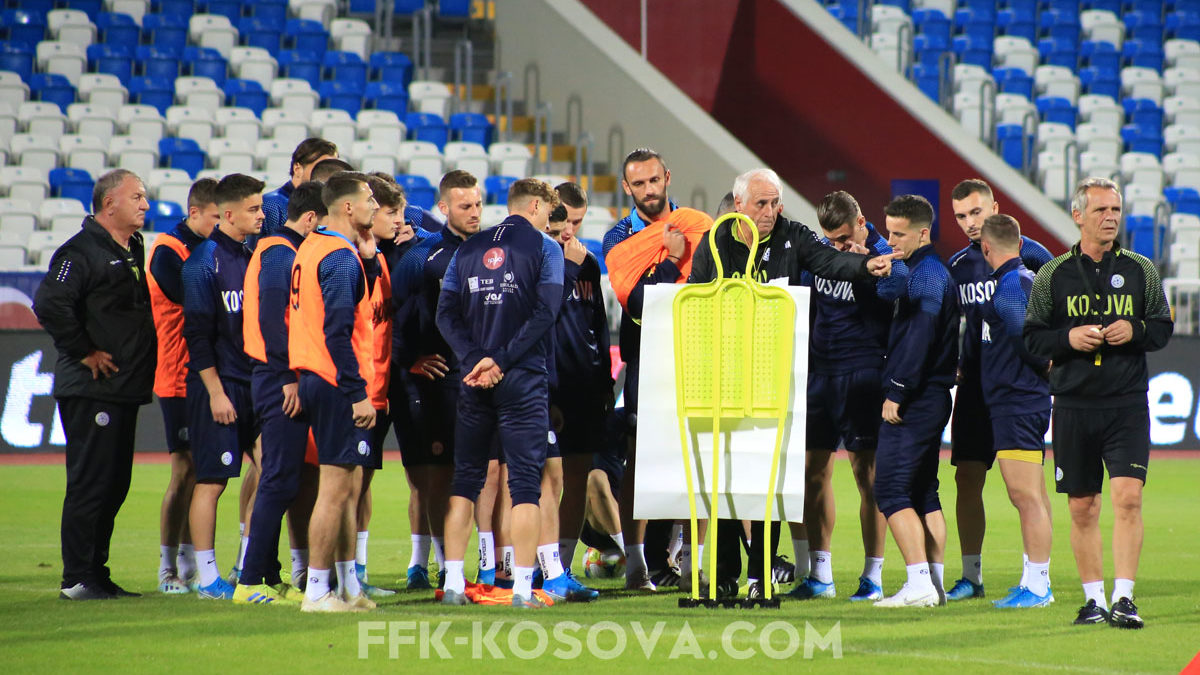 13 October 2019 – Kosovo’s National Team held its last training session prior to the very important match against Montenegro within the 2020 European qualifiers, to be played on Monday at 2045hrs at Fadil Vokrri Stadium in Prishtina. The atmosphere within the Dardans camp before this match is very good and everyone is optimistic for victory thus continuing the dream for qualification to European championship. Meanwhile, in a press conference before the match, the Head Coach, Bernard Challandes and the player Milot Rashica expressed their hope that they will defeat Montenegro.
The Swiss coach admitted that chances for qualification have been made more difficult following the defeat England suffered by the Czech Republic although, as they said, that match does not change anything. “I am not thinking to qualify through the Nations League so far. It is not the time. We can still successfully qualify through regular qualifications. Nothing has changed for me despite the Czech victory. OK, it is more difficult now but I do not think about the upcoming matches. I am focused only in the match against Montenegro. In the end of the qualification cycle if it is not as we thought then we will have the other option. However, if we want to go on with our dreams, we have to win the match against Montenegro”, Challandes noted. He added that his team will have to be focused and play football as they know how to do it. “It is important for me to get the matches one by one. Pressure is sometimes good sometimes not, but I like it. We play in Prishtina where we have never been defeated. We have to give the maximum and show everything on the pitch. People here are euphoric and a general good feeling. We have a good team that everyone tries to do their best“, Challndes added.
On the other side, Milot Rashica who did not play in the friendly match against Gibraltar, said that he is 100% ready to give the maximum in the tomorrow’s match. “I am 100% ready. It was a tough match against Frankfurt in Bundesliga, hard terrain and played for 90 minutes. I had time to recover myself and I am ready to do my best. Of course it is not going to be an easy match against Montenegro but here we have the support of our fans and we have chances to gain three points. So far we have made a good journey and every player has gained good experience. Of course the England’s defeat in Czech Republic made things difficult for us but our goal is to go for victory in every match we play. Are we confident we can win all three matches? Of course we have a lot confidence. We are a good group of players and believe that everything is possible. We only need to go match by match”, Rashica said.
President Agim Ademi, Vice-President Bakir Burri and the Secretary General Eroll Salihu followed the today’s training. During the first 15 minutes of training present were a considerable number of fans as well. 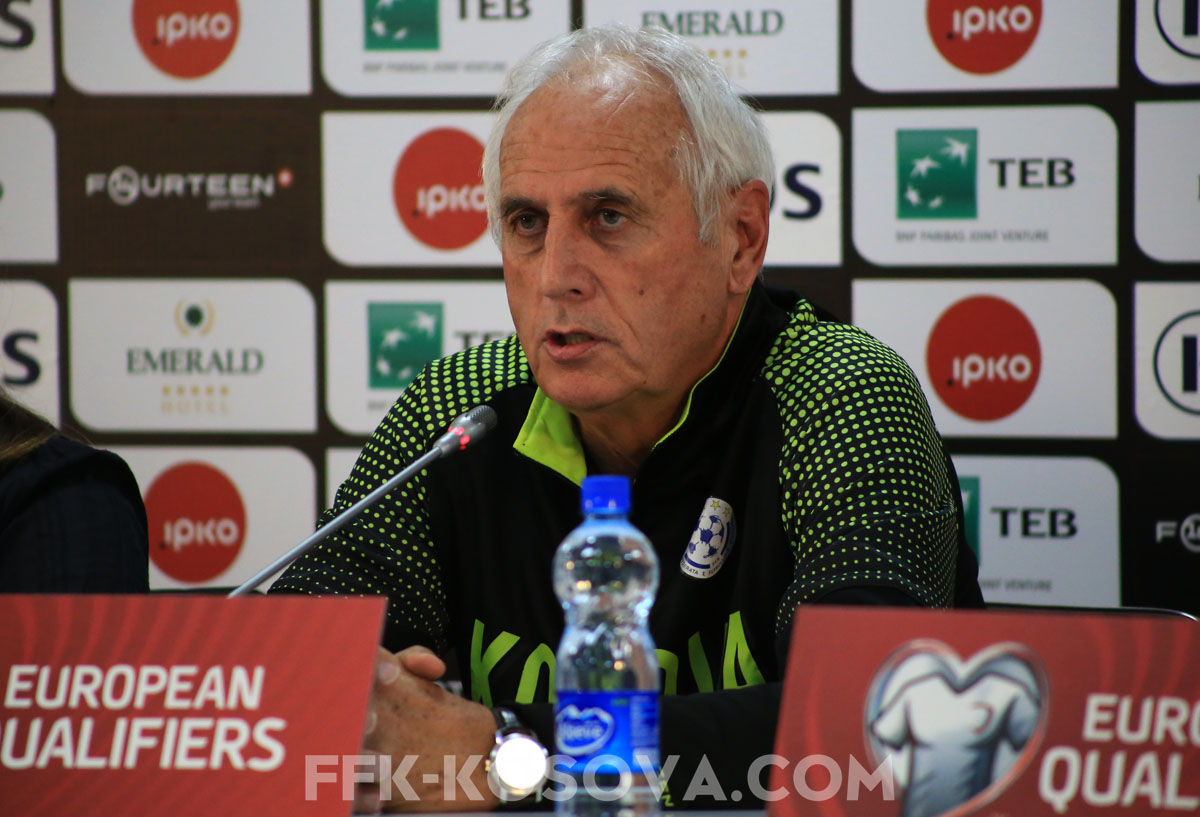 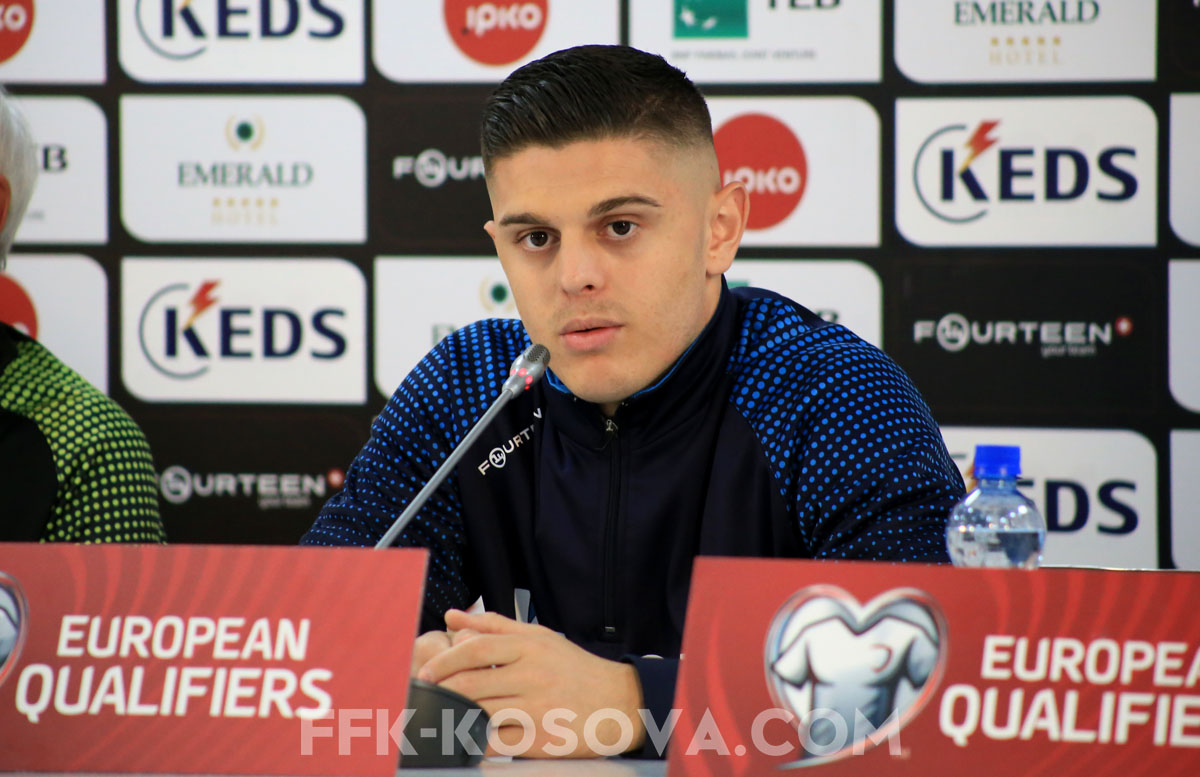 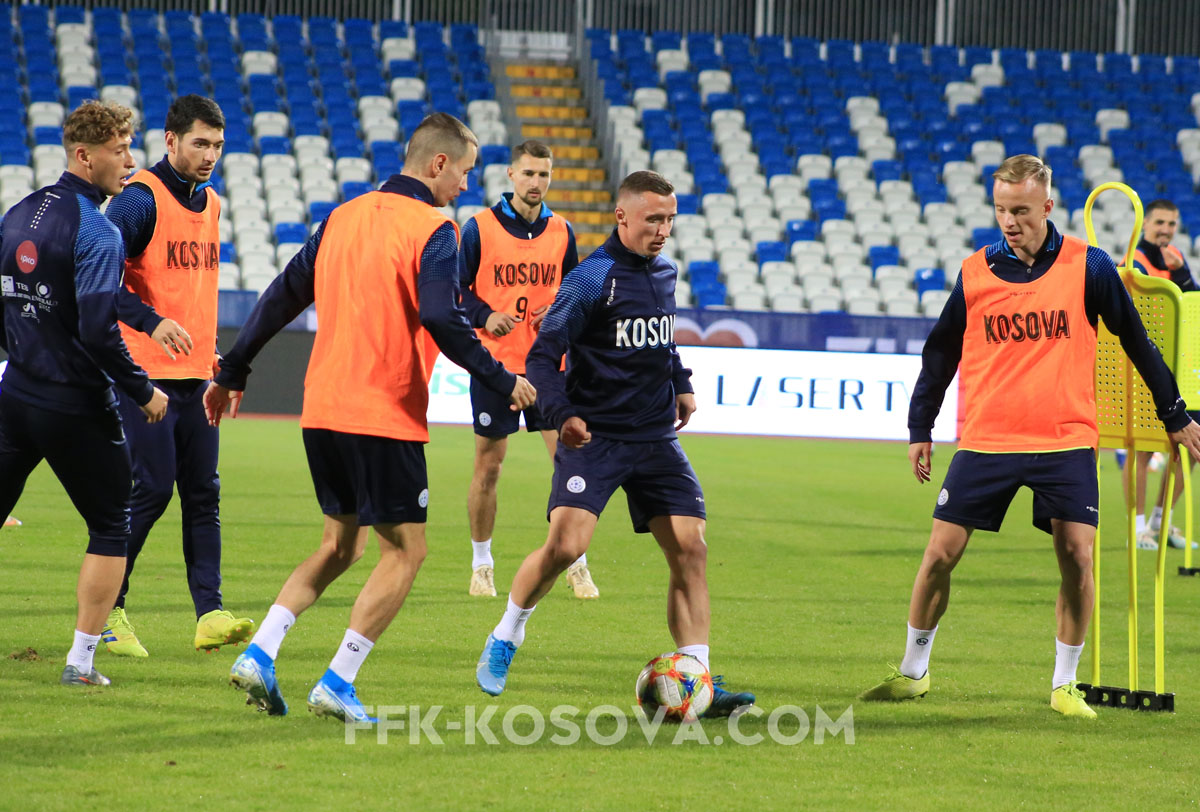 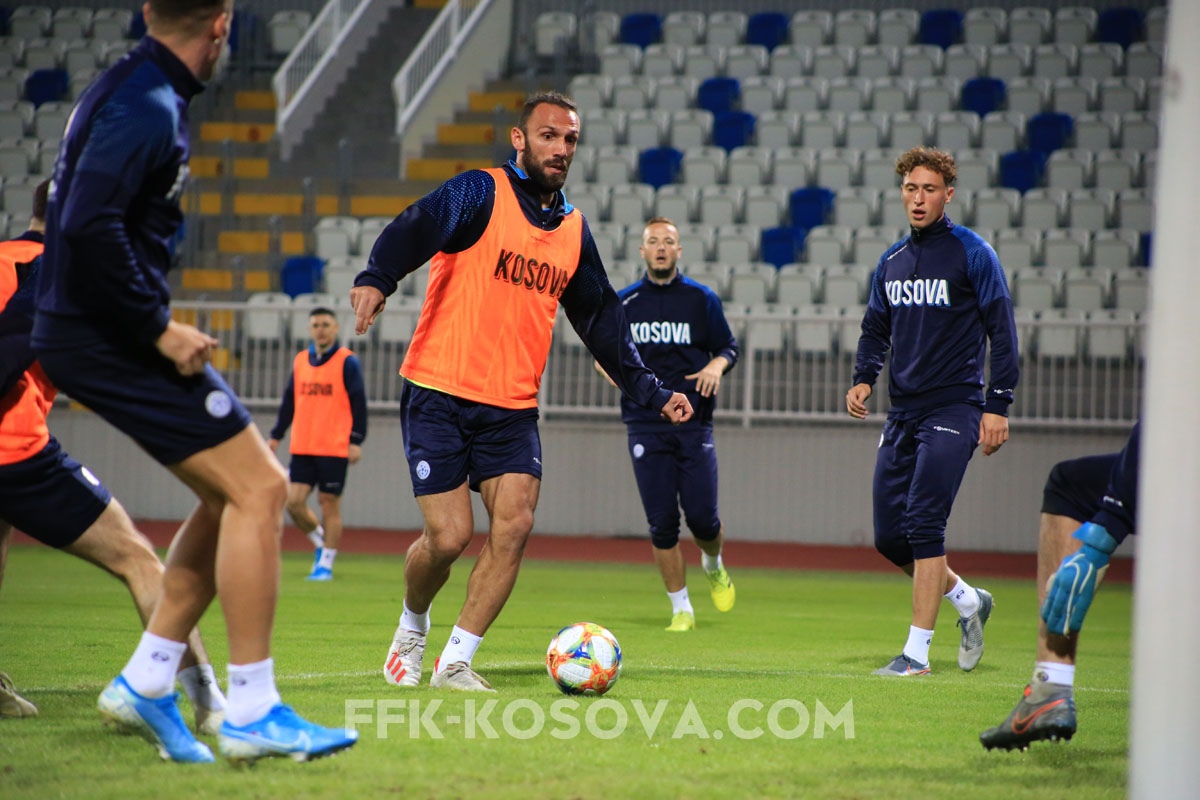 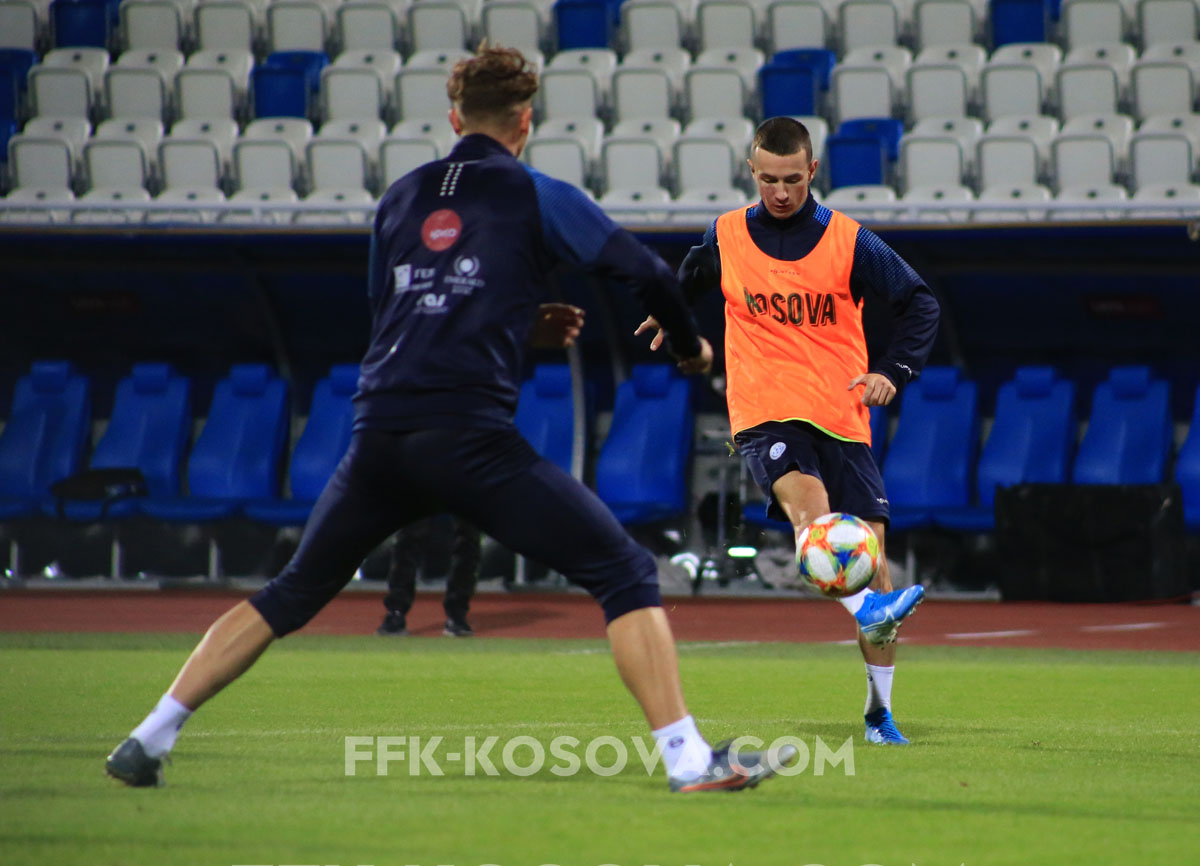 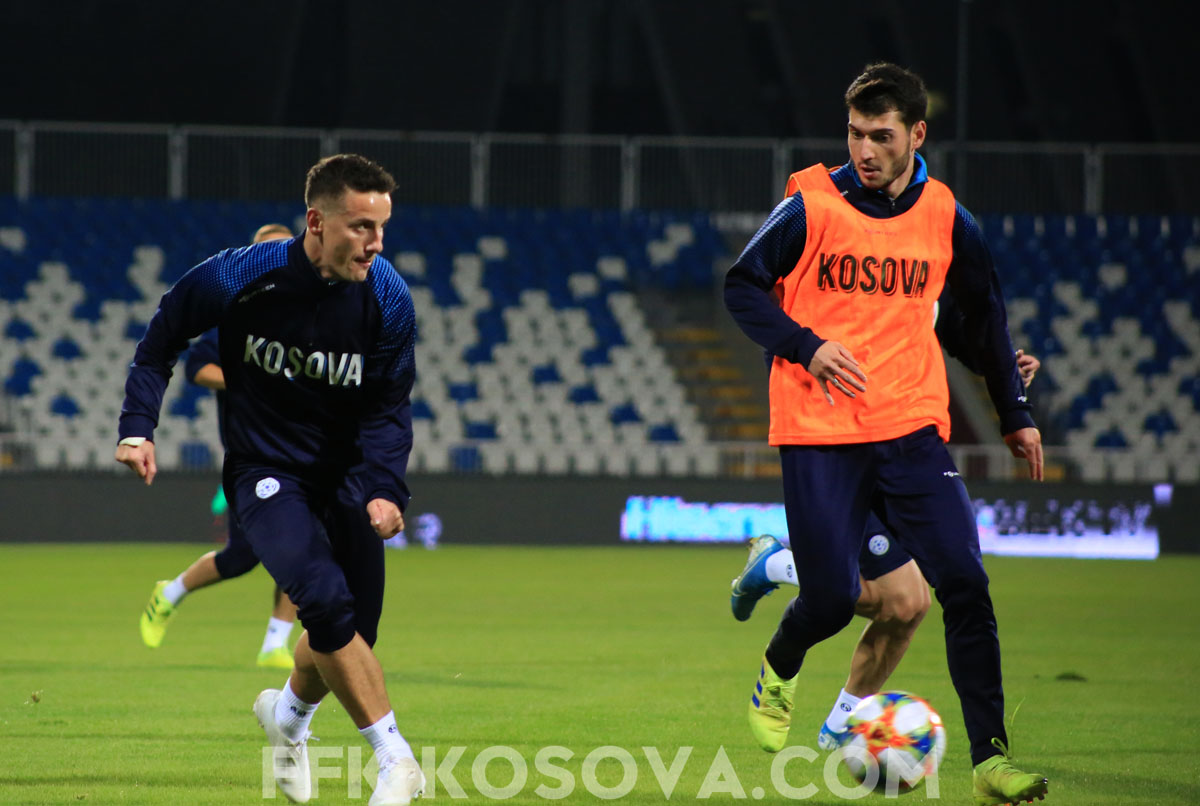