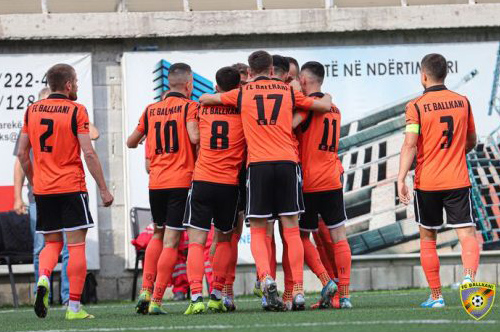 28 October 2020 – Matches of the 9th week in the Super league have been played. The leading team, Ballkan won at home against Prishtina with the reversal of the score at the end of the match with 2: 1. Prishtina took the lead in the 34th minute with a goal scored by Otto John. Prishtina maintained this advantage until the 88th minute when Mevlan Zeka equalized the figures with a goal scored with a header.The same player came on the scene again in the extra minutes, scoring once again; to provide three new points to his team, which already strengthens the first place with 22 points. Meanwhile, home victories were achieved by Drenica against Trepça’89 (2: 1), Gjilan against Besa (1: 0) and Feronikeli against Llapi (1: 0), while Drita was the only team that collected full points on the trip, defeating Arbëria (1: 0).

Friendly match between Kosovo and Albania on 11 November