Home > Main News > Prishtina wins and gets one point closer to the title, Drita-Ballkan without a winner 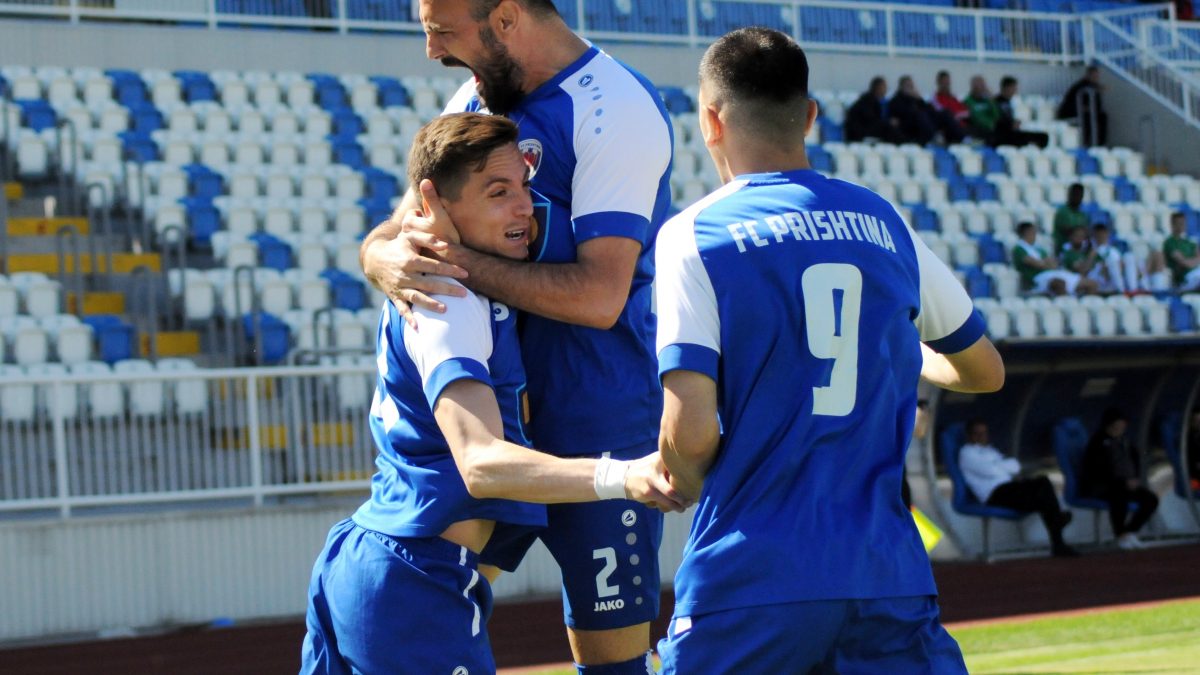 Prishtina wins and gets one point closer to the title, Drita-Ballkan without a winner

9 May 2021 – Matches of the 34th week in the Super League of Kosovo in football were played today. The leading team of the ranking, Prishtina, scored a difficult but very valuable win at Fadil Vokrri stadium in a duel with Feronikeli with 2: 1. Now the white-and-blues need only one point in the last two rounds to be crowned with the title of champion after 8 years. Leonit Abazi gave Prishtina the lead in the 5th minute. The numbers were equalized in the 34th minute when Ardit Nika from carelessness scored an own goal after the ball returned from defense. However, Prishtina scored the winning goal in the 67th minute when the guests’ goalkeeper reacted poorly after the corner kick and in an attempt to punch the ball, sent it into his own net. Feronikeli had a good chance to come out with one point from this match but Simonovski’s shot from the penalty spot was stopped by Nika in the 75th minute.

The two closest followers of Prishtina, Drita and Ballkan closed their duel with 1: 1. This epilogue theoretically keeps Drita still in the race for the title, but not Ballkan, a team which is already 7 points behind the leader and in the last two weeks has to fight for the second place, which also ensures participation in European competitions. Drita took the lead in the 17th minute with Xhevdet Shabani’s goal, while the goal of the equalizer was scored by the orange-and-blacks from Suhareka in the last minute of the first half through Mirlind Daku.

In addition to the title race, the race for survival remains unclear. Trepça’89 scored a very important win as a host by defeating Gjilan thus reversing the score (2: 1). Gjilan took the lead in the 22nd minute with Shend Kelmendi’s goal, but the team from Mitrovica enjoyed the win with two goals scored by Arbnor Muja in the 56th and 68th minutes.

Llapi also scored three important points at home in a duel with the last team in the ranking, Besa, with 1: 0. The only goal in this match was scored by Elvis Prençi in the 57th minute.

Meanwhile, the duel of two other teams that are fighting for survival, Arbëria and Drenica, which was played in Gjilan, ended without a winner, 1: 1. Arbëria took the lead with Marclei Dos Santos’s goal in the 23rd minute, while an important point for the red-and-blacks of Skënderaj was provided by Kreshnik Uka from the penalty spot in the 58th minute. After this draw, Arbëria returns to the penultimate place in the table with 37 points, while Drenica is already in the sixth place with 42 points.

Llapi wins the Kosovo Cup, secures the exit to Europe